Samuel Foote (1721-77) was an actor and dramatist. He was educated at Worcester College, Oxford, but sent down in 1740 without a degree. His stage debut was in the role of Othello. Then he acted in so many stock plays, but his real talent was for comic mimicry. His satires are mainly based on caricatures of characters and situations from his era. His facility and wit in writing these earned him the title “the English Aristophanes.”In 1747 he produced Diversions of the Morning or, A Dish of Chocolate, a successful revue caricaturing several prominent actors. There followed a series of comic pieces and puppet shows, including Taste (1752), The Minor (1760) mainly satirized the Methodist movement., The Patron(1764), and The Nabob (1772), all satirizing contemporary personalities (including some of Foote’s friends). Foote’s leg was amputated in 1766, after a fall from a horse, but he continued to act with a specially made wooden leg. Foote was often embroiled in literary feuds with writers like Henry Fielding, Charles Churchill, and other victims of his ruthless impersonations. He was accused of sodomy in 1776 and, though acquitted, died within a year. 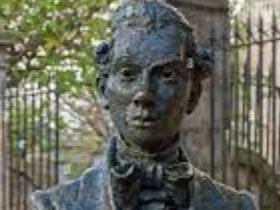