Chance plays a considerable part in Thomas Hardy’s novels. lt is indeed the invisible third party when any two characters have mutual relations. It interferes with human activities in a most unexpected manner. Generally, it is responsible for the sorrows, misfortunes, and suffering of the major characters. 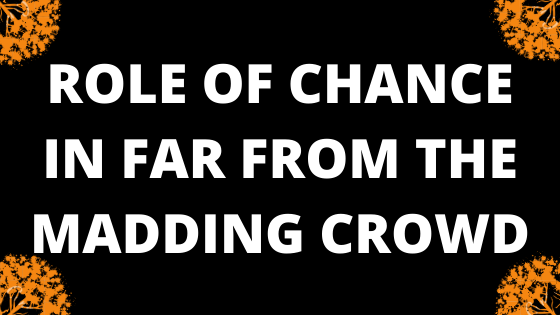 Chance in Hardy’s novels stands for Fate or Destiny, which is always bent upon ruining and punishing man. According to Hardy, the power which rules the world, is indifferent and hostile to mankind. It takes a special delight in torturing and tormenting human beings, who are its victims.

The persistence of chance or the unforeseen in Hardy’s novels, therefore, emphasizes his tragic and pessimistic outlook.

As in Hardy’s other novels, chance wreaks havoc in Far From the Madding Crowd too.

Some of the outstanding examples of the part played by chance are as below:

1. Gabriel Oak sees Bathsheba Everdene for the first time, by chance. He is standing in his field, when he suddenly discovers a pretty maiden, sitting on the top of household furniture, in a wagon, and consulting a mirror. He takes a fancy to her, at first sight. Now if the wagon had not come to a stand-still, Oak would not have met Bathsheba.

2. Chance deals a severe blow to Oak, when his dog drives all his sheep down a steep rock, and when he is, suddenly, reduced to utter poverty.

3. Chance helps Bathsheba to become a rich lady-farmer when she suddenly inherits her uncle’s farm.

4. Chance brings Bathsheba and Oak together when he sleeps in a wag in belonging to Bathsheba’s men and is taken to Weatherbury, where he wins Bathsheba’s favor, by saving her wheat-ricks from a disastrous fire.

5. Chance ruins the entire life of Fanny Robin by sending her to the wrong church, on the day of her marriage. If she had gone to the right church, Troy would have, in all probability, married her.

6. A Chance whim is responsible for Bathsheba’s sending the Valentine to Farmer Boldwood. This Valentine kindles a flame in Boldwood’s heart in which he is burnt up ultimately. If Bathsheba had not sent the Valentine to him, he would have, in all probability, continued to lead a happy and contented life.

7. It is by a sheer Chance that Bathsheba makes her first acquaintance with Sergeant Troy. If her skirt had not been caught in Troy’s spur on that particular night, she would have probably married Boldwood.

8. Chance, once again, deprives Boldwood of Bathsheba, when suddenly Troy re-appears and insists upon claiming his wife, at the Christmas party.

9. It is, by Chance, that Fanny’s coffin is brought to Weatherbury late in the night, and is laid in a room which is visited by Bathsheba. This is how she discovers the truth about her husband’s relations with Fanny Robin. If Fanny’s body had been brought in time, Bathsheba would have never found out that her hair was yellow and that the coffin contained the body of Fanny’s child in addition to Fanny’s.

The persistence of Chance suggests that man has to struggle against forces over which he has no control. He is not a free agent but a puppet in the hands of Fate or Destiny.

Also read: Significance of the title of Far from the Madding Crowd

What is historical novels and its examples

What is novel of sensation and its examples

Discuss about the ending of the novel “Samskara” by U.R. Ananthamurthy

Consider the novel “Kanthapura” as a Gandhi-puran or sthala puran.

Character of William Morel in D.H.Lawrence’s novel “Sons and Lovers”

Discuss the character of Clara Dawes in D.H.Lawrence’s novel “Sons and Lovers”

Discuss “Sons and Lovers” as a social study as well as a psychological and emotive analysis.